The Limited Edition Bauer APX hockey stick has all the same specs and technologies as the original APX hockey stick, but with a blacked out color scheme. The large Bauer logo on the side of the shaft is in a bright pearl white, so it really stands out.

The APX Limited Edition shaft has the popular TeXtreme® construction and Monocomp technology that makes this stick as lightweight and responsive as possible. The flex profile utilizes the premier dual taper for exceptional torsional deflection and shot control. The Vapor line’s signature Intelli-Sense shot technology provides for a “variable” flex point to allow for maximized loading for quick wrist and snap shots.


The APX LE hockey stick comes in grip and non-grip.

Bauer has also introduced a new resin they are using in the APX stick. This new resin has a lighter overall weight as well as offers superior durability to help lengthen the lifespan of the stick.

The Easton Stealth RS stick is the latest and greatest stick from Easton hockey. Easton has a long history of pushing the envelope on hockey stick performance, and has continued that tradition with the Easton RS stick. The RS stick has evolved from the foundation of the former S17 stick and S19 stick. Moving from the S17 to S19, Easton wanted to improve durability and increase the “pop” on shot release, so they stiffened the elliptical profile and re-engineered the blade. Moving from the S19 to RS, Easton wanted to really fine tune the flex profile and perfect the overall stick feel.


Prior to designing the RS stick, Easton wanted to re-visit what their overall goals were for the new stick. What it really came down to was, “making the most out of your opportunities.” In a typical hockey game your team might get around 30 shots, and each player may only get a couple of opportunities to get a good look at the net. As a result, Easton really wanted to make a stick that players can trust that has high-end performance and a predictable feel. When your opportunity comes in the game the RS can help you capitalize on it. When Easton fine-tuned the flex profile, they were able to make it smoother and more consistent, while increasing the “pop” to the shot release.

Easton has also introduced some new materials in the Stealth RS stick that has decreased the overall weight while not sacrificing durability at all. The Easton RS stick features slightly different shaft dimensions than the S19 stick. According to Easton a large majority of their NHL pro players were all using the same shaft dimensions, so they decided to take that as a sign and apply those shaft dimensions to the retail version of the RS stick. The new shaft dimensions have straight sidewalls, and rounded corners. In comparing the RS shaft dimensions to the S19 it is a slight difference but seems like the RS is just a little bit narrower.

The RS stick has an extremely light feel. It may not be the lightest stick on the market but it certainly is in that category. As far as the shot release goes it felt amazing. Has a really snappy feel, and felt like the puck was just jumping off the blade. The RS stick excels most on wrist shots and snap shots, but don’t let this shy you away from taking clappers from the point or one-timers in the slot.

The Bauer Vapor APX hockey stick picks up where the X60 stick left off, and takes the Bauer Vapor stick line into a whole new stratosphere. So to start it off let’s go over what Bauer has kept the same on the APX as the X60 stick, both sticks feature: the high-grade TeXtreme carbon fiber, monocomp design (true one-piece construction), Intelli-sense shot technology (flex profile), Micro Feel II shaft dimensions (slightly smaller and rounded shaft dimensions).

One of the areas where Bauer wanted to improve on was the blade core and puck feel of the X60 stick. Bauer felt they had really nailed the ideal puck feel with the TotalOne sticks and wanted to duplicate it in the Vapor stick line, although they ran into a problem. Since the Vapor line has the lower kick point the heavier blade core was making the blade deflect too much which they did not want. So to get around this they used the heavier dense Power Core III material on the lower portion of the blade where the puck has contact. Then on the upper half Bauer utilized the Aero Foam II which is a much lighter material. This way they were able to decrease the overall blade weight while, capturing the same puck feel as that the TotalOne sticks have, and eliminating the blade deflection.

The other feature that really sets the APX stick apart from others is a new resin they are using. According to Bauer the new resin helps extend the life span of the stick in a few ways. First, this resin is suppose to help the stick maintain its pop throughout the sticks life. In my trip to Bauer’s head quarters in New Hampshire they mentioned that one complaint on the one95 stick was that it lost its pop after a while, and they wanted to address this issue.

In Bauer’s lab testing the APX with the new resin has far surpassed any other stick they have ever made. Another way this resin really helps is in the sticks overall durability. Often a player with take a slash or block a shot with their stick during play and it will not break the stick but it will cause a very small fracture in the stick. Over time this crack will spread much like a crack on car’s windshield. Till one day that play takes that “magical” shot that just destroys the stick and it breaks. The new resin on the Vapor APX stick helps prevent those small crack from growing and spreading over time. According to Bauer the Vapor APX stick will be the most durable top of the line stick they have.
Posted by Richard Neuman at 2:55 PM No comments:

Warrior has given the Widow stick the D-Lite blade core which is the evolution of the Double D blade core. Using a double density internal polymer core, D-lite technology allows for a very stable heel and base area which transitions to a very light and springy mid-toe area. The center of gravity of the blade is also moved closer to the heel area, which makes the blade feel lighter but does not affect stability at impact. Taper hosel area is hollow, allowing for more weight savings. Additional aramid internal blade cap helps impact durability and prolongs blade life.

Warrior has also introduced the Dagger Taper Technology to the Widow hockey stick to offer a lower flex point than ever before with even more pop. The Dagger Taper keeps the hand area stiffer and allows the stick to flex lower in the shaft and blade area as well as in the upper handle. This loads and releases the shaft and blade together for more flex and better pop on slap shots, snap shots and wrist shots.

The Reebok 6K Sickick III grip hockey sticks offers a great value with an affordable price and some high-end features. The 6K stick features the Sickick III technology which uses two different carbon weaves on the front and back of the stick to give an extra pop to the shot release.


Posted by Richard Neuman at 6:04 PM No comments: 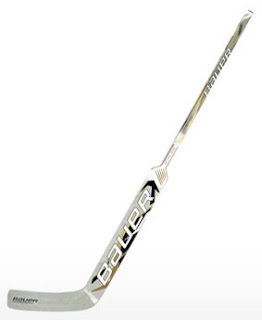 The Bauer Supreme One100 Goalie Stick is the top of the line goalie stick from Bauer. To provide the performance that one would expect from Bauer, they have used an INNEGRA™ fiber wrap in the paddle and blade. Bauer has also used a reinforced aerospace core in the paddle of the Supreme One100 goalie stick. This combination enhances the durability of the stick by providing additional stiffness, but also helps to reduce the overall weight and vibrations of the stick.

The 2011 Warrior Dolomite DD is a great all-round stick for intermediate players at an affordable price. While top-of-line Warrior sticks like the Kronik are a little lighter, they are also more expensive.

I really like the change in graphics for 2011. I was never crazy about the out-of-control 80`s graphics they used in past years.

The Dolomite DD has a low kick point which makes the stick easy-to-load so it`s great for wrist shots and snap shots. You might think about a stick with a higher kick point if you`re going to be taking a lot of slap shots.

The Double DD blade is designed with a dense foam core in the heel and softer foam in the toe. This gives you a great feel when stick handling the puck puck and makes it easier to receive passes.

The combination of two polymers in the blade adds strength where you need it and cuts weight where you don’t. High-density foam is used in the heel to provide maximum velocity and durability by increasing the blade’s center of gravity. Low-density foam is used in the toe to reduce weight and soften feel. This combination of Double Densities decreases blade torque at contact.

A longer, lower tapered section focuses energy into the bottom quadrant of the stick. This concentration of flex eases load and release for increased shot velocity with little effort.
Posted by Richard Neuman at 3:08 PM No comments: